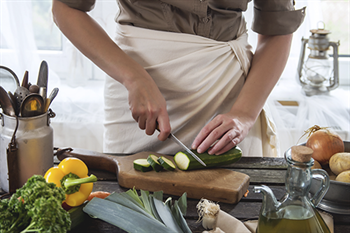 To start you off right, first you need to know the different types of knives there are. A basic set of knives would normally come with four types of knives, a paring or peeling knife, a bread knife, a chef’s knife and a utility knife. Knowing which knife is for which is important for the outcome of the food and sometimes even the outcome of the dish could be affected. You wouldn't use a paring knife to cut a loaf of bread, same as you wouldn't use a bread knife to slice up an apple. Although you can always use the knife of which you prefer, usually the bigger the knife, the thicker the food is. So a chef’s knife would work well for cutting meat where a paring knife would be better used to slice up vegetables and fruits.

Never use a dull blade to cut something, as it will leave a jagged and uneven cut. Although sharpening a knife can become a task on its own when you don't take good care of your knives, it is well worth it. There are many different kinds of tools you can buy that will help sharpen your knives, but the easiest would be a simple sharpening rod. All you have to do is slide the edge of blade on your knife up and down on the rod and voila! As sharp as a knife, they would say.

Now that you know what knife you need to use on which thing you are cutting, you're ready to step up from that boring, old knife and into a world of fine cooking. If you ever get curious and try out new foods and new kinds of knives other than the basic few, you'd be surprised on the dishes you could create.

Bulk cutting boards is your number one source for buying cutting boards in bulk. Made from high-quality solid hardwood, all models are available in Maple, Walnut and Cherry. We offer a variety of different styles and sizes to accommodate various industries and demands. This family business works hand in hand with their clients to build trust and maintain solid business relationships. Have a custom project in mind? Let us know and we will work together to turn your vision into reality. Stock products ship within 2-3 business days.